WWW.CocoaCrew.com   It’s all about you!
Thanks for your efforts my friend!
Great Lady!    Website provided by Lois Atkinson.

Lots of Florida History here:  http://www.floridamemory.com/
We have enough youth…
How about a fountain of  “Smart”?
Come to the next event and see what your missing!  lol
A Secret!     Keep Wed  August 14th open!
There is a  SURPRISE  Birthday Party and
CREW event at the Olive Garden on M.I.
To honor,  Mr. Phil Eschbach’s 90th Birthday!
RSVP before Aug 9th:  June Cox jbugw@cfl.rr.com
or Priscilla Ferkins  saavik31324@yahoo.com
What would Mr. E say?    School Board members in
the south west Ohio district will allow administrators
to walk it’s hallways with loaded handguns.   They
must have concealed carry licenses and be trained
and certified by Ohio Officer Training Academy.
Reason? To try to improve Security. Today NP 7-25-2013
INDY 400!   Nascar race, Indianapolis Sunday Noon!
Be like a postage stamp.
Stick to one thing until you get there.
– Josh Billings

Sent from my i-teepee while sipping from fountain of average. 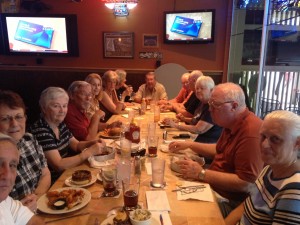 Server: Michele was excellent!
Classmate spotted!  Yes!   Roger Greek & John Dean
talked with  Bobby Oliver  while in Clayton, Ga.
Bobby has not been seen since 1959?  Happy to hear
he is alive, well and moving to Fernandina Beach, Fl.
If you have an email address for Bob, forward this.
The CREW wants him to know we still think about him!
Got Carrots?    This is  National Salad Week!
What’s up Doc!  lol
Uh Oh!   Mix  PMS & GPS  and you will get?
Answer:   A crazy chick that  WILL  find you!
Hummm  Ole Indian will be at  JD’s!

Wednesday Aug 14  a Secret!
A surprise event, Mr. Phil Eschbach’s 90th Birthday!
To be held at the Olive Garden on M.I.
Write your favorite memory on a 3 x 5 card or bring
a photo for the memory jar!
RSVP before Aug 9th:  June Cox jbugw@cfl.rr.com
or  Priscilla Ferkins  saavik31324@yahoo.com
Next event:     Florida Seafood  C.B.  on July 31st.
Visit # 14    Last:  5-15-13
A warm smile is the universal language of kindness.
– William Arthur Ward  Sent from my i-teepee…   remembering that Bobby Oliver and Conrad Koch sang a lot of songs together while at CHS!
Hello CREW…

This test is not an easy one.  (It’s very hard)
Website reports that avg.  score was 49%.
College professors average about 55% and most
politicians are lower than that!  See how U do!
Intercollegiate Studies Institute – Educating for Liberty
There are only 33 questions.
After the test!   Relax tonight and watch

the
Hooters Swimsuit Pageant   Channel 32  9PM.
Relaxing is an essential part of getting a mental
break from stress and allowing yourself to reset!
–  Advice from Tribe Medicine Man
The most valuable of all talents is never using
two words when one will do. – Thomas Jefferson

Sent from my i-teepee while trying to think of ONE word!  Ugh!
Hello CREW…

Comments last night 50/50… ranged from:
Good  to  Don’t Want to Come Back!
No way to have everyone happy! 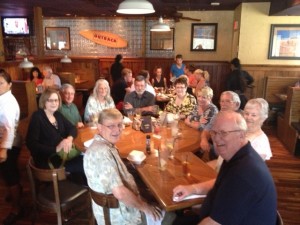 Twenty-three men and one woman gored while
running with the Bulls!        Darn!  Hasn’t anyone
figured out this might not be a smart thing to do?
Ugh!   Buffalo NOT any friendlier!
Maidens be safer and more fun!  lol
Reality Check?    This website sent to us from
Classmate Greg Moorehead, will give
you an idea how long you might live!
http://media.nmfn.com/tnetwork/lifespan/#0
Ugh!   Medicine Man say I am good for one or two moons
if I just eat Buffalo Wings and drink Cold Beer!

What is the meaning of life?

To be happy and useful.   – Tenzin Gyatso

Sent from my i-teepee while trying to be useful!

Agreed!     Yes,  Longhorn’s Steak House  is great!
But, lets give the folks at OUTBACK a chance!
This will be the  CREW’s  1st visit!

Always wondered how he got his nick name?
Joe Caruso.  A good man who helped Cocoa area
teenagers have a safe and fun place to go.
Not Guilty.    George Zimmerman trial is finally over.
As always there are two sides to every story.
Just hope folks can accept & respect the jury’s decision.
Pamplona, Spain   Update!     Bulls  23    Runners  0
Twenty-three men gored while Running with the Bulls!
Ugh!   Ole Indian not run with the buffalo this year!
BUT  will continue to run after the maidens!  lol
With mustard?   July is National Hot Dog Month and a
new record was set in eating contest by Joey Chestnut.
A total of 69 hot dogs in 10 minutes!
Beware of monotony – repetition;
it’s the mother of all the deadly sins.
– Edith Wharton

when / if  you catch maiden!

David Alexander, Shirley Pomeroy,
Myrna Swindell and BTB.
Server:  Anna was an Italian treat!
A good thing!   Classmates were happy to welcome
Shirley Pomeroy to the CREW event.
She is moving back to Cocoa very soon.
Service recognition!    A plaque with a CHS Tiger
and inscription is in work for a surprise
presentation to  “Christie”  a Superior Server!
Range:  $18 for 8×9   up to  $40 for a 10×12.
Dadgummit!       Bobby Bowden is working for FSU!
Signed a two year, contract to promote
athletic activities for the Seminoles!
5 Billion!    From June 12 to June 12,  Florida took in
Five Billion Dollars  in lotto sales!
All the money goes for education!   yea, right!  lol
Shark Kabobs!    Tried them before they tried me.
A  tasty  lunch  at  Grill’s!

One good teacher in a lifetime may sometimes
change a delinquent into a solid citizen.
– Philip Wylie
Sent from my i-teepee knowing Mrs. Pomeroy tried to help me!

325 East Merritt Island cswy   453-2610
http://restorantsandraves.com/bizzarros-pizza-menu/
CNN News:   Italian Doctor thinks he can do a
head transplant!  Say’s it is now possible.
Hey Superman!   I want to talk to you!
Info 4 Guys!   What does the color of Roses mean?
http://www.squidoo.com/RoseColorMeaning
Ugh!  Ole Indian think Yellow is good!
Top 10:   State that drinks the most beer per person
is N. Dakota 45.8 gallons.  #2 New Hampshire 43.9
Way to go Conrad… Cheers!    Sadly, Florida sips
34th in ranking with 24.7 gallons per classmate.
Let’s help Florida!  See ya at JD’s Sports Bar for a beer!
No Bull?

Darn!  The running of the bulls in
Pamplona, Spain starts 0800 Sunday.
Dang it!   Missed it again…

Well pilgrim, it’s still on my Bucket list!   NOT!
Hummm ole Indian now runs for Buffalo!   (wings!)
Got story?    Tom McFarland is asking for stories,
pictures and anecdote’s for the next issue of the
Mosquito Beaters Memory Book.  Remember one?
Send to:  mcfarlan@fit.edu  or  321 454-4265
Holding on to ANGER is like drinking poison
and expecting the other person to die. – Buddha
Sent from my i-teepee…    Ugh!   Me not angry with anyone!

One of the acts that would eventually spark the War for American Independence was when the British government authorized Writs of Assistance to British officers in the colonies. This gave government the power to search any residence or business without any warning, supervision or rules. Soldiers were allowed to walk from door-to-door, house-to-house, searching and confiscating property to their hearts’ content.

As is always the case with government power, this policy was widely abused. When the Founding Fathers drafted and ratified the U.S. Constitution, they included the Fourth Amendment — the prohibition of search and seizure — to guarantee that no such affronts to liberty would happen again.

Today, we see a government agency that thinks its has the power to search citizens by going from phone-to-phone, gathering any-and-all data to examine to their hearts’ content. The National Security Agency phone scandal is precisely the sort of government action the Founding Fathers fought a revolution to stop and why we celebrate the Fourth of July holiday.

We also have an Internal Revenue Service that targets political dissidents, which is a direct violation of the First Amendment. A Department of Justice that seizes journalists’ phone records without a warrant, which is a violation of both the First and Fourth Amendments.

The signers of the Declaration of Independence would be appalled.

Another reason we fought the revolution was to prevent government oppression of protest, with perhaps the Boston Massacre being the most famous example.

In Egypt, protest is met with tear gas, manufactured in America and paid for with American taxes. When Egyptians protest, they protest against their government and also America for subsidizing that government.

Despite the fact that Mohamed Morsi recently convicted 16 Americans of political crimes in a show trial, the Obama administration still sent them over $2 billion this year.

Hosni Mubarak brutally suppressed protest over three decades of martial law. Yet, we sent him some $60 billion, much of which was stolen by Mr. Mubarak and his family.

Today, we give the same billions and fighter jets to Mr. Mubarak’s successor, Mr. Morsi, who the protesters now see in the same light as Mr. Mubarak.

But worse, due to our aid and support, Egyptians see Mr. Morsi and America as the same.

Some American politicians never know when to say no. Three prominent interventionists called for arming Moammar Gadhafi the year before they called for arming the Libyan Islamists rebels who overthrew Gadhafi. Which Islamic rebels killed the American ambassador? No one seems to know and no one has been brought to justice. Often, today’s “rebels” can become tomorrow’s tyrants, and vice versa.

How does it look to the world when we celebrate independence and freedom in our own country while aiding and abetting dictators and despots who deny liberty to their own people?

Now, Mr. Morsi has been ousted due to massive protests — and we subsidized his government the entire time he was in power

In all likelihood, we will continue to finance the military junta that replaces him.

Why? To what end?

People must fight for their own freedom. We fought for it in our own country, even as we see today’s government so often betraying the Founders’ vision. We see people fighting for freedom in other countries, even as US interventions work to stifle their efforts.

This week, as we commemorate our independence from England 237 years ago, we must remind our leaders that they took an oath to the Constitution that we expect them to keep. This government does not have the power to spy on citizens without a warrant. It cannot target political protesters, journalists or anyone who dares to dissent.

We also have a responsibility not to aid despots around the world, as people in those countries continue to fight their own struggles. America is at her best when we lead by example, not by force, and certainly not when we send F-16s to dictators to squelch dissent.

The Declaration of Independence states “Governments are instituted among Men, deriving their just powers from the consent of the governed.”

It is up to us as Americans to constantly remind our leaders that without our consent, they have no power. It is also up to people in other countries to fight their own battles, to give their own consent and to create their own governments.

You cannot give a people liberty. They must fight for it themselves.

You also cannot constantly fight other peoples’ battles. We have plenty of battles to fight right here at home.

If this isn’t the most stupid thing you’ve ever heard then I need to re-train my logic.